The 14 days morocco Sahara desert tour from Casablanca is a marvelous trip across the country , from visiting the Moroccan imperial cities to the camel rides over the sand dunes and a night under the stars in Berber camps and many more. which makes your journey a memorable experience.

Options:
– Extendable to 15 days, 16 days or more.
– Foreign currency payment is acceptable.
– The price can be changed according to the number of persons. 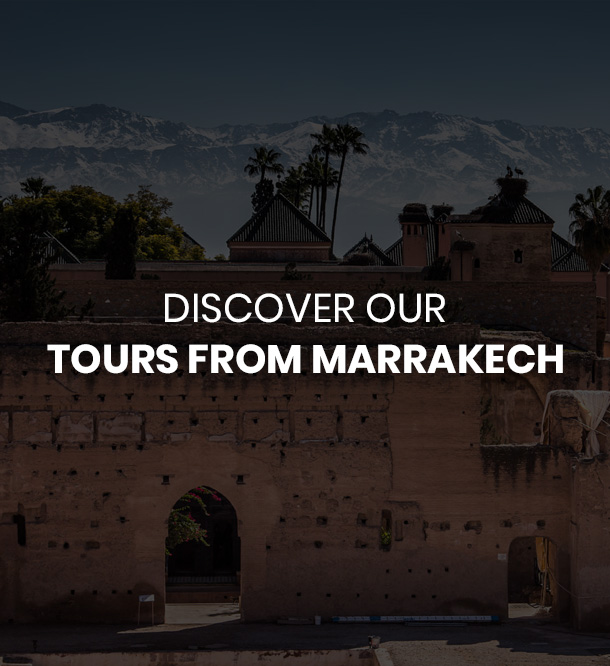 Upon your arrival time to the airport , we will greet you and drive to Casablanca and then to Rabat. In Casablanca you will see the Hassan II Mosque, the largest outside of Mecca and experience the coastal “Cornish” seaside. Afterwards, we will leave to Rabat, the capital city of Morocco. Here, you will see the Hassan Tower, the Oudaya Kasbah before your check-in at your riad. your accommodation will be in a riad at the heart of the Medina.
2

After breakfast in your riad, you will start travelling to Fes via Meknes and stop for a short time to see the Volubilis in Meknes, another significant imperial city in Morocco. It is known as the Ismaili capital of Morocco, you will also visit the famous gate Bab Mansour, the Sahrij Souani Bassin, and Mulay Ismail Mausoleum. After lunch, your journey continues to Volubilis, the Roman ruins, dating to 25BC where some of the original mosaics are still in very good shape, explore the site and continue to Fes via the foothills of the Rif Mountains. Get to Fes at the end of the afternoon. Check in at your riad at the heart of the Medina, before dinner and night.
3

After breakfast , you will be taken on an exploring guided tour in Fes which is the oldest city in Morocco, walking in its alleys and small streets. Our visit starts by visiting the Royal Palace gate, the Jewish headquarter, the first Mellah in Morocco, was built during the 16th century. We will ensure that you visit all sites with cultural and historical interest including the famous Al Qaraouine University, the oldest in the region, the Tanneries, the Attarine museum and Mulay Idriss mausoleum. After lunch, you will visit the tiles cooperative and then experience a wonderful panoramique view over the whole Medina of Fes.In the afternoon, we will visit the new city “La ville nouvelle” for a drink before we return back to your riad.
4

After breakfast in your riad, we will leave Fes travelling towards Ifrane, a beautiful mountains village, referred as “the Switzerland of Morocco” then continue to Midelt. During this journey you’ll experience glimpses of the Middle Atlas and High Atlas mountains. Stopping at Azrou, a Berber village in the middle of the famous cedar forest, the largest in Morocco, there you will see Barbary apes. After a short stop within the forest, your journey continues to Midelt along the magnificent hills and mountains of the Atlas. There you will be accommodated in your luxury Hotel.
5

After breakfast in your hotel you will travel to Merzouga via Errachidia and Erfoud. You will be travelling through the fascinating Tiz-N-talghamt pass and Ziz Gorge, that’s in views of the High Atlas plateau, you’ll notice how the scenery changes to reveal hints of the desert as you approach the city of Errachidia, here you will have lunch and enjoy the Berber hospitality. Afterwards, you will travel along the luxuriant Ziz Valley, stopping for panoramic views in the way to Erfoud and Rissani. Arrive to Merzouga at the afternoon. You’ll be welcomed with a glass of mint tea before you check in to your riad, before dinner and night.
6

After breakfast in your riad, you will be taken in an explorative journey of the area before you camel trek. to the Gnawa people, originally slaves brought from Sudan, to experience their music and lifestyle. Not far from our location there’s the lake of Merzouga, with its bird populations. You may also visit the nomad wire house where many Berber handicrafts are priced lower than in the big cities. On the afternoon you will mount your camel, guided by our experienced camelman to explore the golden sea sand of Merzouga .Returning for dinner in front of the tent, where you will spend the night. (the camp is equipped with flush toilets).
7

We wake up early in the morning and go on a camel trek to watch the best sunrise of your life. You’ll peacefully camel trek back to the village of Merzouga. Enroute you couldn’t fail to appreciate the unique beauty of the spectacular Erg Chebbi sand dunes, changing with the light as the day progresses. After breakfast in the riad/hotel, we’ll leave to Tinghir , via Rissani, and Todra gorges, the highest narrowest gorges in Morocco. After lunch in the heart of the gorge we’ll drive through the Dades Valley, where you’ll see the majestic sand castles and the amazing rock formations known as “monkey toes”. We will spend the night in a fancy hotel overlooking the Dades valley.
8

After breakfast in the hotel, We will travel through the Dades Valley towards Kalaa M’gouna and Ouarzazate. The route through Dades Valley is the way of the thousand kasbahs providing numerous opportunities to take some of your best photographic shots of the trip. Today you will have the opportunity to meet Berber Nomads in their caves and then you will enjoy the fertile Rose valley and the rock formations along the way. We’ll stop at Kalaat M’gouna, “the rose city”, to purchase the rosewater, which will make your linen smell good a long time after your trip is over. Continue to Skoura and the birds valley; visit the Kasbah Ameridil, which is preserved kasbah in this area. After some hiking in the valley stop in a restaurant, overlooking the whole valley, for lunch. After lunch we drive to Ouarzazate , “the Hollywood of Africa”, whose geography and beautiful landscapes has attracted many world class movie producers. Here you may choose to visit the studios, containing props used in movies, you may have already seen, such as The Mummy, Gladiator and the Last temptation of Christ. Spend the night in a local riad.
9

After breakfast in your riad, we’ll drive to Taroudant via Taznakht and visiting Ait Benhaddou Kasbah. The former is the largest Kasbah in Morocco, was built by T-hami El Glaoui, one of the last Berber chieftains during the beginning of the 20th Century, it used to be one of his stops during his long travel from the Sahara to Marrakech., one of the UNESCO heritage site. Continue to Taliouine, the capital of Safran in Morocco, you have the option to visit he Safran co-operative. If your visit coincides with the Safran harvest, you will have the opportunity to meet the Berber people with their families harvesting the Safran in their fields. We should arrive at Taroudant in the afternoon, here you will see the ramparts and walk within the small alleys in the Medina. Taroudant is always referred as “The little Marrakech” because of its walls that look like the walls of Marrakech and has the influence of the Saadian dynasty , which built both walls of either city during the 16th century . Dinner and night in a hotel.
10

After breakfast, we will drive through Essaouira via Agadir . Our first stop will be at Agadir , a resort city which used to be a very big tourist destination for many years. After lunch and small walk at the Promenade, we will continue to Essaouira . The coastal road offers beautiful scenery, an area famous for the Argan trees, here we will see herds of goats climbing the Argan trees looking for better food they can’t find on the ground. After several stops along the coast we get to Essaouira in the afternoon. Dinner and night in a riad.
11

After breakfast at your riad, we be will on a guided tour exploring the city. You’ll visit Skala Fortress, the port, the souks and see Thuya wood carved by artisans; walk through the alleys of the medina and view hundreds of handicrafts. Essaouira is known with its strong winds most of the year that’s why it’s called “City of the wind” this attracts wind surfers from all over the world. Essaouira has many civilisations, including the Portuguese occupation, which affects much of its architecture, however it remains a small village with much history. Because of its size and its characteristic blue doors and washed walls, it is also regarded as Morocco’s “Jewel of the Atlantics’. Our visit includes the Mellah, the Jewish headquarter, and the beach. There is an annual festival of ‘Gnawa music’, where many musical groups come from different parts of Africa and the world. Usually it starts in the second week of June, so if your trip coincides with this, you have the option to extend your stay for an extra day. Today you will have lunch in a Moroccan way, bought fish ( cooked to order). On the afternoon, you have free time to walk leisure. Dinner and night.
12

After breakfast in your riad, depart to Marrakech. Since this land of Argan culture On our way, this will an opportunity visit to the women’s co-operative of Argan oil where they extract the oil that is famous for its culinary, cosmetic and medical properties. After several stops to take photographs, you will continue your travel to Marrakech and check-in to your riad before we go to enjoy walking within the famous square of Jamaa Elfna, entertained with magicians, story tellers, musicians and snake charmers. Returning for dinner and night in the riad or hotel.
13

After breakfast in the riad or hotel , you can start exploring Marrakech ” the red city of Morocco. We will ensure that you see the most important sites of historical and cultural interest, including the Majorelle Gardens, the Koutoubia Tower, the Saadian tombs, the Bahia Palace and the Ben Youssef Coranic School. After Lunch at a restaurant near the square, you will walk through the souks and view hundreds of handicrafts. In the afternoon, you will have some free time to walk by yourself and see Marrakech as you like. Dinner and night at your Riad or hotel.
14

Join the SetSail community today & set up a free account.